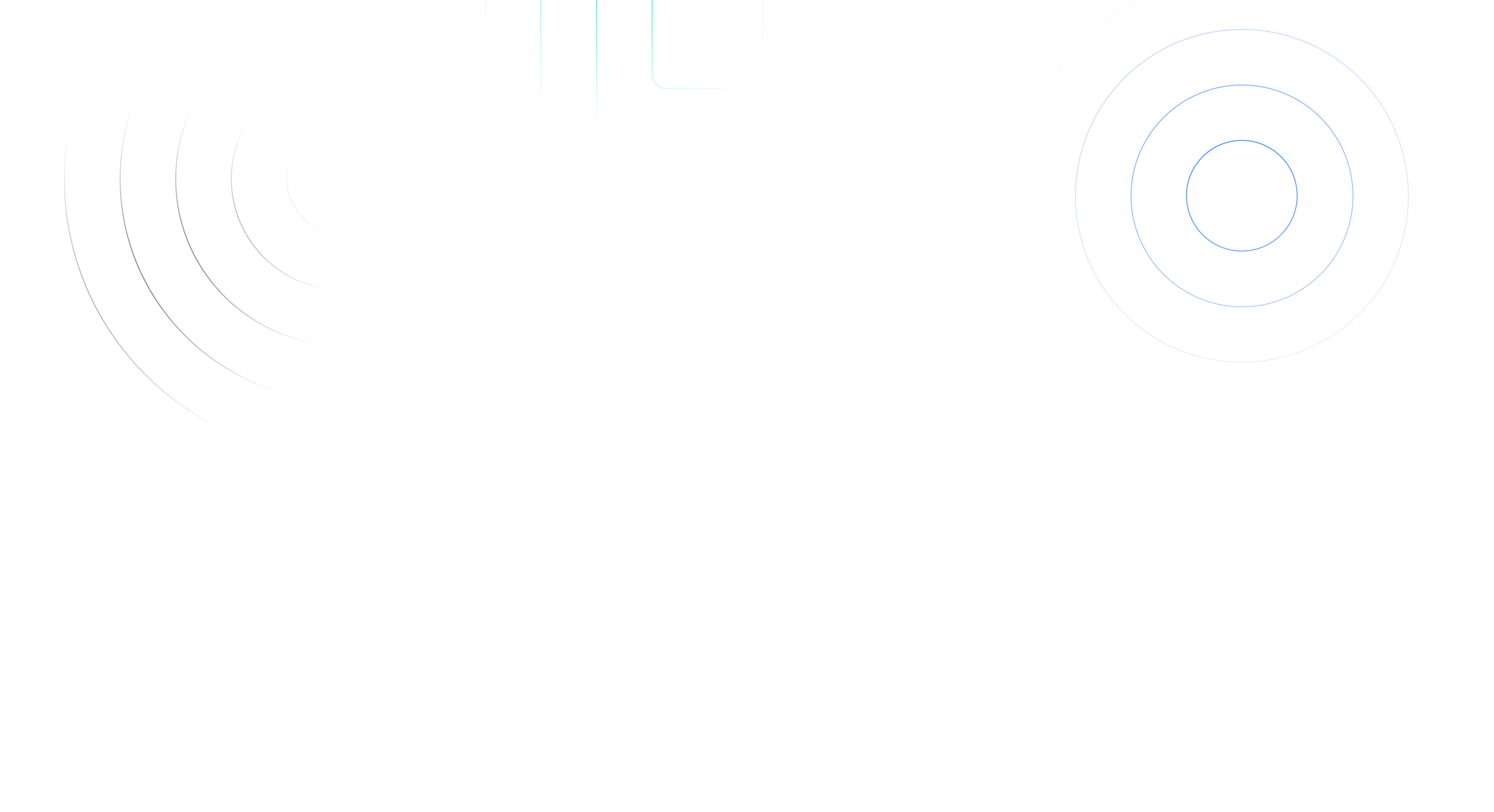 The African tech ecosystem is blooming steadily, and according to “The e-Conomy Africa 2020” report by IFC (International Financial Corporation) and Google, Africa has the “world’s youngest, fastest-growing and urbanized workforce”. This makes it an even more appealing destination to hire tech talent. 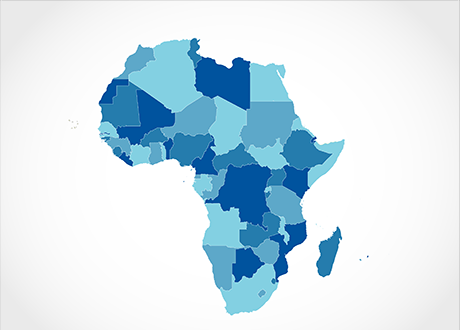 Africa is well-known for being rich in natural resources the likes of gemstones, gold, timber, oil, and cocoa, but its tech talent pool is another component that’s becoming evidently popular in recent times. With software development being recognized as a key economic development tool, Africa is emerging as the next frontier in tech talent hiring. With the rise of the COVID-19 pandemic and the worldwide migration to remote work, the demand for hiring African software developers has increased. The number of African developers grew by 3.8% in 2021, according to the Africa Developer Ecosystem report from Google and Accenture as more and more global companies opt to hire developers in Africa.

The African tech ecosystem is blooming steadily, and according to “The e-Conomy Africa 2020” report by IFC (International Financial Corporation) and Google, Africa has the “world’s youngest, fastest-growing and urbanized workforce”. This makes it an even more appealing destination to hire tech talent.

The guide below will provide all insights about the African IT talent market for anyone interested in hiring African software developers.


There are over 700,000 professional developers in Africa. More than half of the developers in the 16 nations surveyed are concentrated in five key regions: Egypt, Kenya, Morocco, Nigeria, and South Africa. Africa’s internet economy is expected to grow to 5.2% of GDP by 2025, contributing about $180 billion to the African economy. It is believed that the projected potential contribution from this sector could reach $712 billion by 2050.

The charts below have been extracted from the African Developer Ecosystem 2021 report by Google user content. 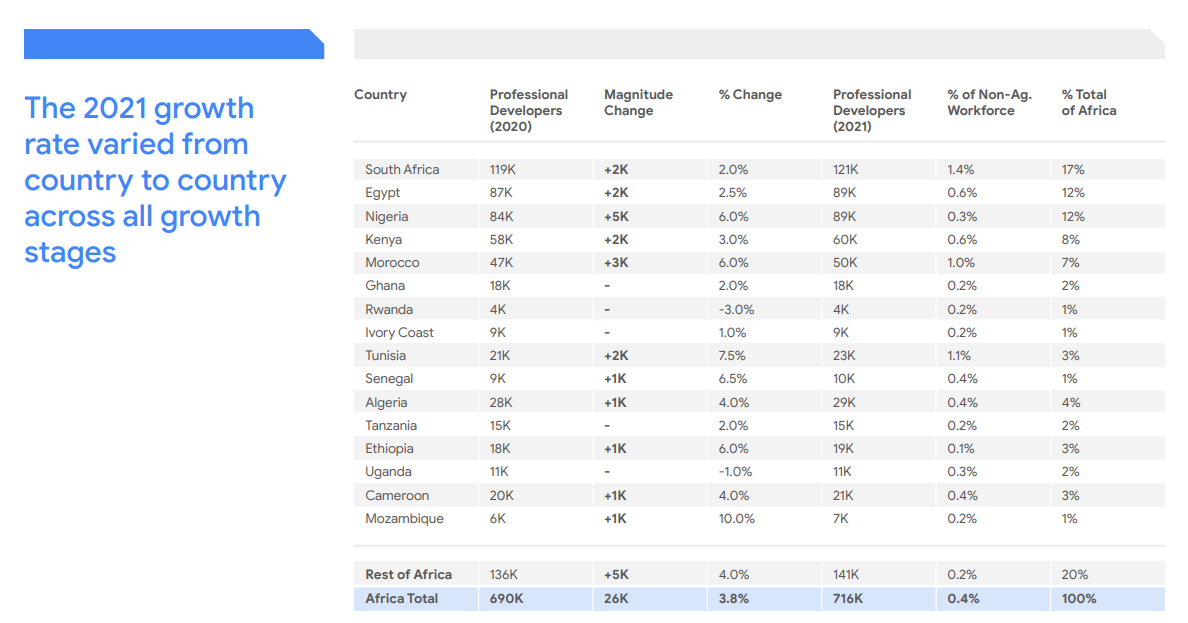 Africa’s growth in the IT hiring business can be attributed to three major factors. These three factors include the increasing capacity of local startups, who are recruiting more than half of African developers, increased global demand for remote tech talent, and lastly, local companies increasing their usage of the internet and hiring developers to grow their online presence. 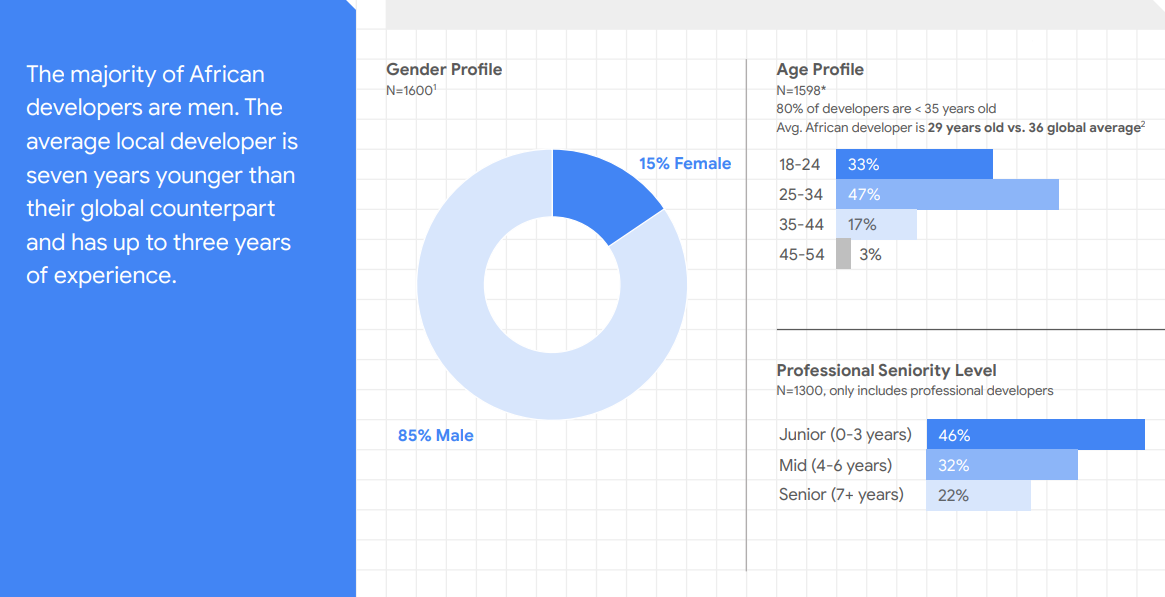 North Africa has become a chief hiring destination thanks to its cost competitiveness and time-zone compatibility with Europe. It is only five hours ahead of New York. Egypt is thriving in the software development industry and has experience working with North American firms. It has a remarkable track record, with some of the world’s leading companies, like Vodafone, Orange, Intel, and SQS, choosing Egypt as a home for its worldwide service delivery centers.

Furthermore, due to the common language, similar time zones, and cultural compatibility, most French firms find Morocco and Tunisia as appealing talent-hiring locations. Morocco has one of Africa’s greatest economies and its government has invested plenty to make it a top tech talent destination. These two nations offer abundant infrastructure to entice new players into the talent hiring industry. Companies in North Africa are well-versed in technologies such as Linux, Ruby, MySQL, No SQL, and PostgreSQL.

South Africa is not new to this industry, as it continues to grow and broadens its skill set. It is, nonetheless, the dominant player in the African software development industry. The region is well-known for having a large pool of talented and innovative software developers with great expertise. Tholons, the information technology research, and strategic advisory firm, ranked the country, specifically the city of Johannesburg, among the top 30 software development talent destinations in the world.

It is an excellent location for many European and North American companies, particularly those on the East Coast. This is due to the fact that the country shares the same time zone as many EU countries. South African developers are skilled in technologies such as mobile app development, C++, PHP, and SQL.

Technology hubs are emerging in East Africa. Nairobi, Kenya’s capital, is known as the “Silicon Savannah” because of its large concentration of programmers. Nairobi is home to hundreds of Kenyan businesses and has an extremely supportive infrastructure that encourages technological innovation among emerging businesses. Kenya, with two official languages, English and Swahili, has become one of Africa’s most prominent cities, both politically and economically. Kenya and other East African countries are particularly proficient in Java development, SQL databases, and mobile software development.

West Africa has been working hard to establish itself as a substantial player in the IT industry. Many governments in this region have recognized the potential advantages of hiring remote developers. Nigeria is one of the region’s most notable countries. It is Africa’s most popular country and the world’s sixth most populated country. Lago, Nigeria’s largest city, has enormous potential to become a tech hub.

The Nigerian government is enacting policies to encourage technological advancement and has prioritized IT education. Most companies that have worked with Nigeria have mentioned that Nigerian citizens are friendly and sociable.  Although various languages are spoken in the country, the official languages are French and English. This facilitates communication with foreign firms. The majority of Nigerian and West African IT workers are proficient in Ruby, C++, Java, and HTML.

3. Reasons to hire developers in Africa

The African tech community is primarily composed of English speakers. English proficiency is becoming a vital necessity in the African educational system. This makes it one of the best geographical locations to hire offshore talent, as these developers can readily integrate into any firm where English is the predominant language. The chart below depicts the level of English proficiency in various African countries. It is largely based on the English Proficiency Index (EPI). 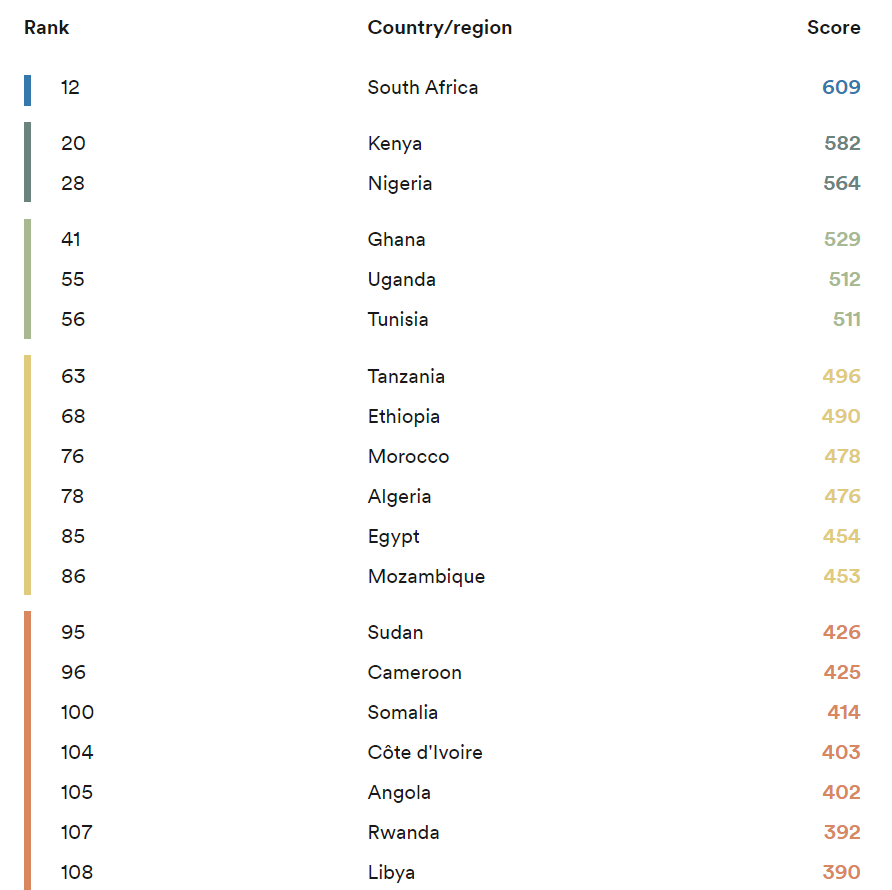 Furthermore, 75% of African developers presently work in a remote or hybrid workplace and this trend appears to be expanding. Over the past decade, Africa’s technological progress has accelerated, with high-speed internet becoming more widely accessible across the continent. Remote work has benefited African developers by making it easier for multinational firms to build teams with these African developers. Africa is also perfectly aligned with the time zones of Europe’s technological hubs, so there is no time difference between an Accra developer and one in Barcelona. This facilitates synchronous remote work.

Africa has a large talent pool. The IT talent market is dynamic and has been growing rapidly over the past two years. There are about 716,000 developers on the continent, with the majority actively looking for work. Over 80% of South African developers, for example, are either open to or actively seeking foreign opportunities. Four out of every ten African developers work for at least one foreign firm, with five working for local start-ups. You can find a wide range of technical skills based on your needs. Some of the most popular software frameworks are .NET, Android, and Javascript. Different regions of Africa are well-versed in various tech stacks.

African developers are world-class. These African developers are able to work across a variety of popular frameworks like Node.js, Angular, and React. The government, educators, and tech companies are helping these African developers succeed by improving internet access, education, and business support. Bootcamps and certifications are part of these developers’ formal and informal education. These are available to bridge the vocational training gap between traditional education and employment in the future. This improves job readiness and assists in alleviating the IT talent shortage. The distribution of education can be seen in the chart below. 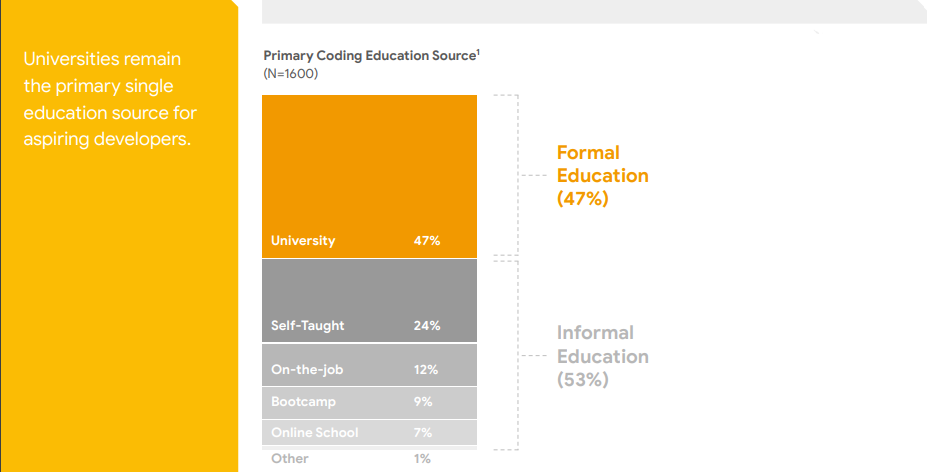 The graph below depicts the average salary of a developer in various African countries. 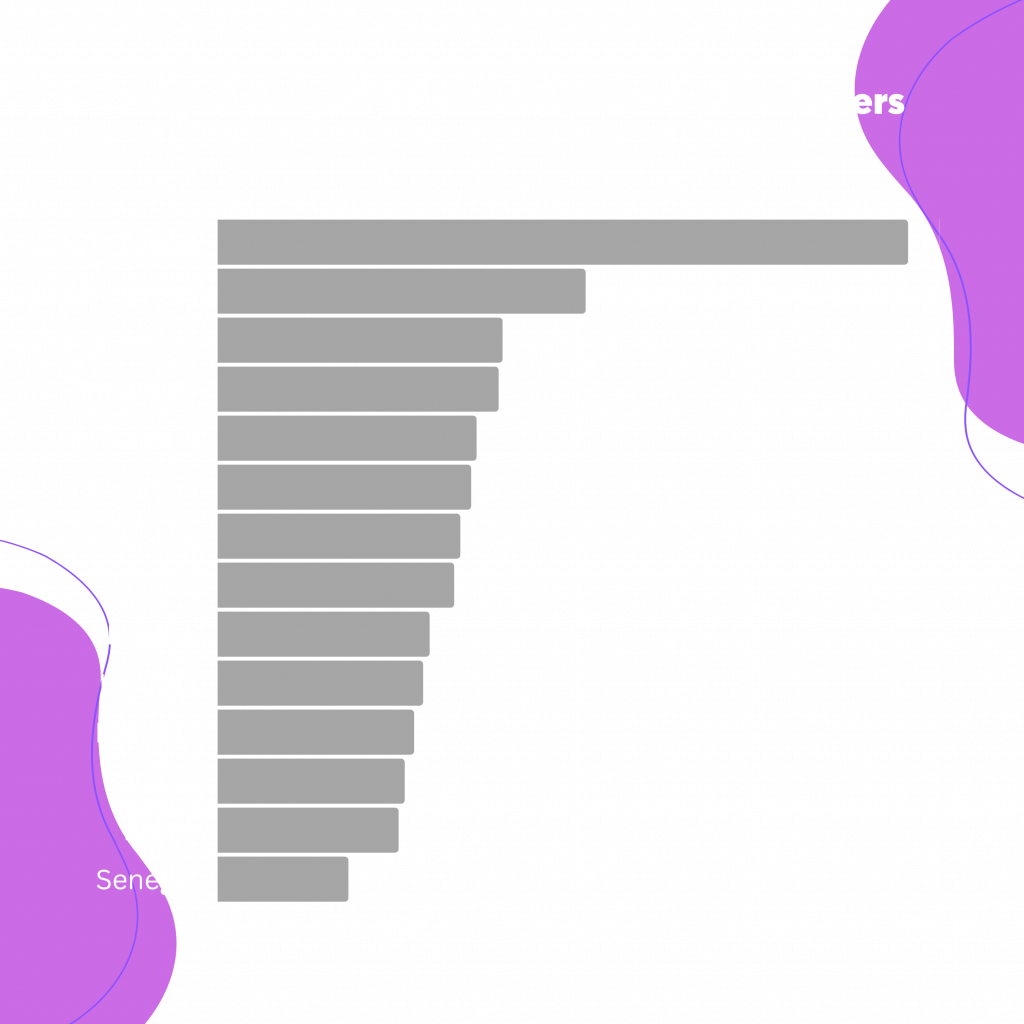 5. Where to find software developers in Africa?

Hiring a remote developer can be time-consuming and energy-draining. Finding the right developer is a process that, if not done properly, can cost you and your company important time and money. There are several platforms available for locating specialized tech talent. The following are some of the most common ways for hiring developers in Africa.

These agencies will hire remote developers on your behalf. You’ll need to tell them about your project requirements and they’ll make sure to find developers that meet your requirements.

Global job boards like Indeed, Monster, and Linkedin Jobs are certainly familiar to you. There are also other smaller platforms.

Apart from Linkedin Jobs, you can use Linkedin. It is a social media platform unlike the usual. It caters to the needs of business-oriented people from every industry. This is what makes it a great place to network and locate developers to hire. You’ll be able to make some valuable connections.

It is one of the most effective methods of hiring. You can ask for recommendations from people in your personal and professional networks. These recommendations will highlight the most talented individuals, leading you to make less-risky decisions.

6. Things to consider when you hire developers in Africa

The approach to hiring remote developers will depend on the organization. However, there are a few important factors to keep in mind when you hire tech talent in Africa. Perhaps you need one developer with a specific skill set or maybe you require an entire team of developers to build your tech project from the ground up. Whatever the technical requirement is for your business, you must consider the following factors before you hire developers in Africa:

7. Why should you hire African developers from Unicorn.Dev?

Unicorn.Dev is a specialized tech talent platform with an elite talent pool of 8000+ developers and designers from around the world. Unicorn.Dev talents are all seniors with at least 5 years of experience in their domains. Whatever tech stack and area of expertise you’re looking for, you’ll find it here. Unicorn.Dev will provide you with a bespoke solution assuring top-quality tech talents whether your needs are part-time, full-time, or project-based.

All of its talent pool has undergone a rigorous 5-stage vetting process that assesses their coding skills, speed, and language proficiency. This ensures that the quality is maintained throughout all of your projects. Unicorn.Dev guarantees that their clients are matched with suitable talent within 24 hours.

When you’ve been matched, and once you’ve made your pick, you’ll be able to communicate with the chosen talent via a private Slack workspace. Each talent comes with a 7-day free trial to see if the chosen talent is a good fit for your company. If you’re unsatisfied, you can request a replacement or decide not to use their services anymore. They also provide weekly contracts that allow you to pay as you go, so there’s a minimum commitment. Furthermore, if you find a developer you like, you can buy the developer off the platform. Unicorn.Dev gives you a daily 4-hour time-zone overlap to help beat the time difference with foreign firms. This time overlap facilitates communication and collaboration.

Get in touch with Unicorn.Dev consultants here to discuss your project requirements and hire developers in Africa. 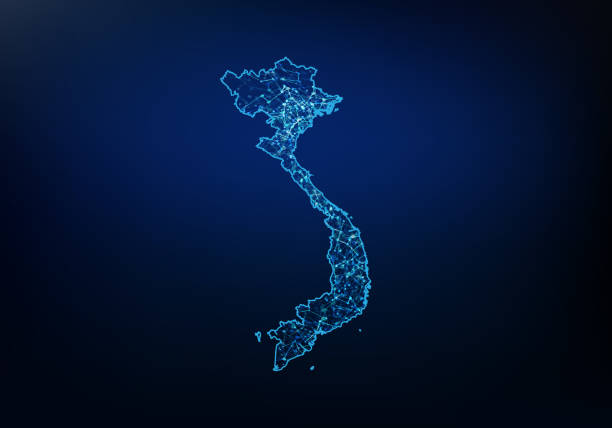 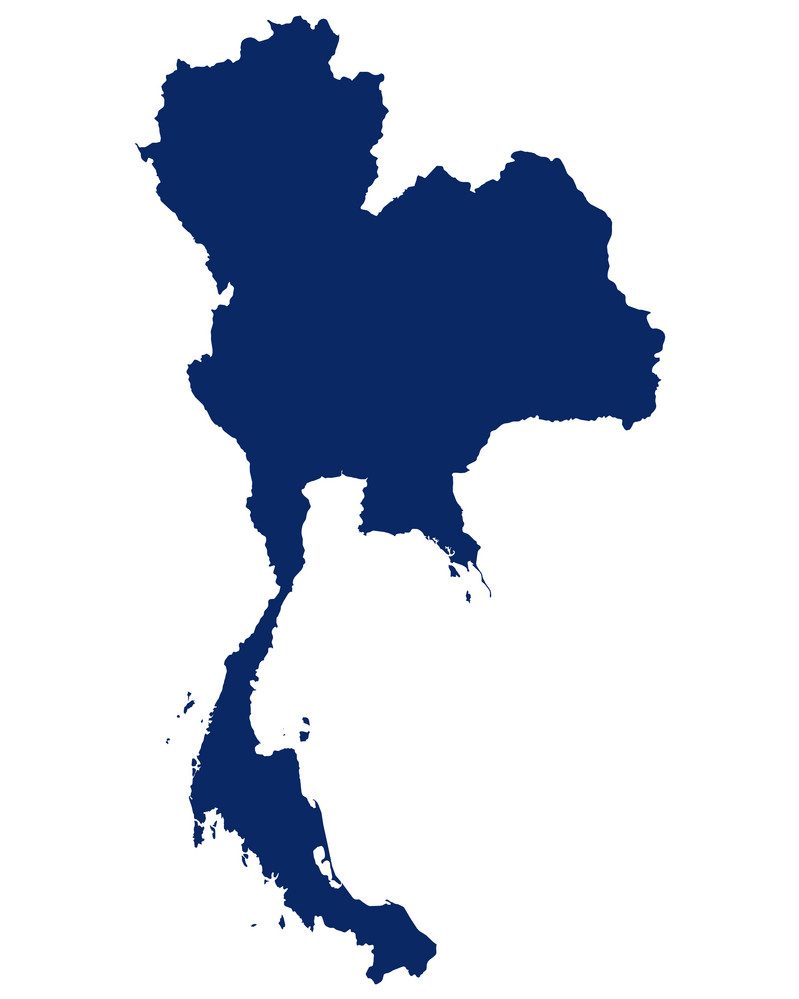 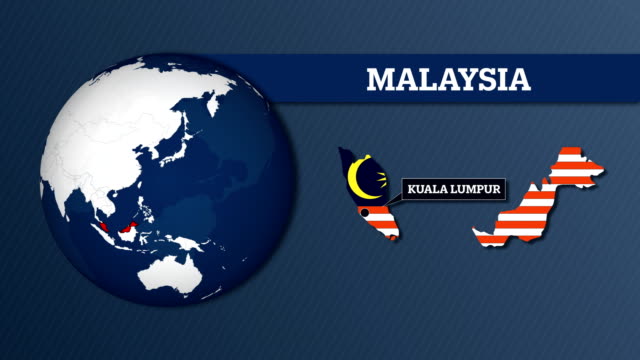 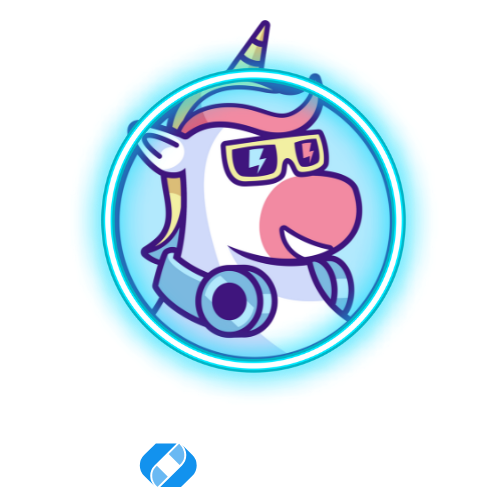